For some reason I've always been intrigued by ducks. Maybe it's the same reason so many children's books feature ducks and ducklings: they are accessible in the wild but are also often very approachable and can be tamed. They make great onomatopoeic sounds (Quack!) and most are really cute.

When Jim and I were first married, long before I became interested in birds and birding, I took photographs of ducks everywhere we vacationed. Somewhere in a box of pictures I have ducks from San Francisco, ducks in New Orleans, and ducks in Florida. The epitome of ducks on vacation are the Peabody ducks. Living in the Peabody Hotel in Memphis, those ducks are always on vacation! And they get the Penthouse Suite.

Jim teased me about taking those photographs; they usually included nothing to distinguish the area where these ducks were living, so what was the point? Back then I had to pay to have the film developed and printed, only to toss the photos into a box, rarely to be looked at again. So I stopped taking photographs of ducks.

Fast forward to my new found interest in birding .... and the ducks are back, along with some geese and many other birds. The amazing thing about ducks is the sheer variety of them, and interestingly few actually have the word "duck" in their name. Not counting hybrids, there are over 100 species of ducks and they are found all over the world, except in Antarctica. Their compact bodies look sleek in the water but oddly funny as they waddle on land. They waddle along for awhile but when they take to the air, they can take off almost vertically without any "runway" build up. 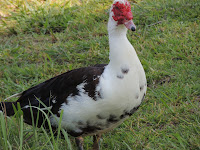 So, here are a few of my favorite ducks... Bob the Duck is a Muscovy duck, one of only two species that have been domesticated, and the presumed father of the ducklings that hatched at the pond near our home in Pflugerville. Male ducks have nothing to do with caring for babies and the mother duck only leads the ducklings around. She disappeared, with all that remained being feathers, leaving the ducklings to fend for themselves. Ironically, right after I put up Duck Crossing signs, most of the ducklings were gone. The remaining two were taken to Wildlife Rescue to be raised in the safety of a farm. Sadly, Bob disappeared a few months later, most likely also having fallen victim to our local coyotes. 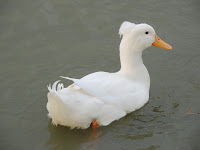 I have a fondness for the all white Pekin ducks, especially those that are experiencing a bad feather day, like this one in the lake at Murphy Park in Taylor, TX. An old breed, they date back at least to 2500 BC in China and introduced in the US in the 1870s. Pekins are a type of Mallard, the other species of domesticated ducks.

I'm starting to notice, and identify, wild ducks but will explore those at a later time. Oh, and I'll get to the goose later, too.

Email ThisBlogThis!Share to TwitterShare to FacebookShare to Pinterest
Labels: ducks

Herons, Egrets, and Ibis, Oh My!

I didn't really start looking at birds or intentionally trying to find them until about two years ago. Yep, I am a late-blooming bird brain. Most of my "birding" has been either accidental—they happened to be sitting on the fence outside my kitchen window—or during destination vacations. For example, Jim and I specifically booked a private guide to take us to the Rocklands Bird Sanctuary in Montego Bay, Jamaica during our time in port while on a cruise specifically so that I could hold a hummingbird (I highly recommend our guide, Alrick, Your Jamaican Tour Guide, by the way.). The beautiful Swallow-tailed Hummingbird (called the Doctor Bird locally) is the national bird of Jamaica. This seemed to make birding something either unintentional or really special. So recently I decided to take time every week to bird and to bird locally when we are home in Central Texas. 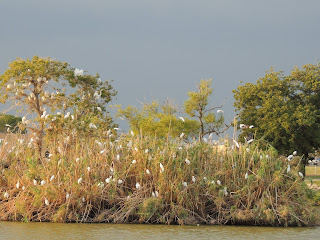 Oh, my. What fun! I read about Murphy Park in nearby Taylor and had to go! I couldn't even begin to
count the egrets, herons, and ibis that were roosting. From a distance the trees looked like magnolia trees in full bloom but as you look closer with binoculars or a good zoom lens it's easy to pick out several different species.

I'm still learning to distinguish between the various species and there are various types of heron and egrets roosting here but I had never been up close to cattle egret.

The cattle egret is a type of heron that, as the name implies, usually hangs out around cattle, snacking on the insects that invariably are near cows and horses. They are also attracted to smoke and often show up at fires to feed on the insects that are trying to escape the flames. The buff plume on its head is an indication that it's breeding season. Cattle egret nest with other herons and egrets (and a few ibis) near a body of water, building a platform of sticks for its nest. 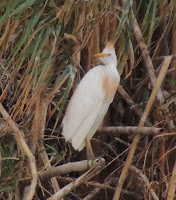 One really interesting thing I learned about cattle egret is that they are native to Africa and only reached the Americas in the late 19th century. Starting in South America, cattle egret didn't make it to the US until the 1940s. Block the borders; cattle egret are now one of the most abundant of the North American herons.

Heron and egrets belong to the same family, and just to be even more confusing, some of the 64 species are called bitterns. Birds referred to as egrets are mainly white while those called heron have grey, white, black, blue, or brown feathers, often quite mixed. Egrets also tend to be smaller than herons, but again some of the smaller herons are similar in size to an egret. Regardless of whether it's a heron or an egret, these are fascinating birds to watch! And Murphy Park is close enough to home to allow for frequent visits.
Posted by Jeanette at 5:51 PM 1 comment:

Maybe my brain is finally being replaced by feathers but after a long time spent resisting suggestions that I start a blog, I've given in. This blog will include my thoughts about the birds I see, birding in general, and books that I read about birds and birding.

I was inspired by the legendary amateur birder who lived in Rockport, Connie Hagar (1886-1973). A native of Corsicana, Texas, Mrs. Hagar moved to Rockport and began birding. She would write in her journal, pretty much every day, counting the various birds she saw and chronicling the various species she saw. Often she had to prove to the "experts" that she knew what she was talking about as they sometimes refused to believe that certain species were found along the Texas coast. She was never wrong! Her work to catalog and conserve the birds led to the Texas Legislature designating the Little Bay area of Rockport as the Connie Hagar Wildlife Sanctuary in 1943. I have to recommend that any bird enthusiast read Connie Hagar: The Life History of a Texas Birdwatcher as biography and Texas history but also for the ornithology. I learned so much about birds from the descriptions of the many, many birds that Mrs. Hagar observed every day.

So how did I get interested in birds? Interestingly for a very outdoors pursuit, it started with a book! I'll explain that story in my next post.