The cutest creatures in The Last Jedi are the Porgs. Personally, I thought they looked a bit like my cat, Maggie and I was repulsed by the idea that Chewie had barbecued one. He eats one and then is friends with the others! The Star Wars films are filled with odd aliens but Porgs don't seem to serve any purpose. So why are they there? The reason they exist is really pretty practical. Skellig Michael, also known as the island where Luke Skywalker lives, is over run with puffins! Since the filmmakers couldn't get rid of the puffins (even though they do actually hunt and eat puffins in Iceland and some other areas, Skellig Michael, off the coast of Ireland, is a wildlife preserve so the puffins are protected) and it would have been near impossible. and unbelievably tedious, to digitally remove them. So puffins became Porgs! 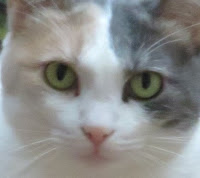 Puffins are tiny and elusive and hard to photograph. Although we saw some in Alaska, this is the best photo I could get. I had hoped to see many in Iceland but Hurricane Harvey canceled that trip so I have to be satisfied for now with my far off sighting. Some aquariums, including Biodome in Montreal, have puffins, like the one I was able to photograph in captivity (but that doesn't count for birders). Still, they are interesting to watch up close.

There are four species of puffins: Atlantic, Tufted, Horned, and the Rhinoceros Auklet which is anatomically a puffin, although it looks quite different. Porgs are based on Atlantic Puffins. They dive for fish, using their feet as rudders so that it looks like they are flying underwater. They burrow between rocks on sea cliffs, using their bills to cut into the soil and their feet to push it away. Puffins don't begin to breed until they are about 5 years old and can live to be 20 years old. They use body movements to communicate and the wider their beak is open the more upset the puffin is. In addition to Wookies and humans, their greatest predators are Great Black-billed Gulls. (Just kidding about the Wookies.)