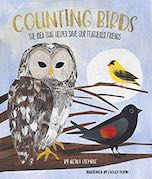 Imagine a sport where you spend Christmas day shooting as many birds as you can. Over a hundred years ago many hunters would compete to kill as many birds as they could. Birds of all kinds were considered fair game. Finally, one man proposed that that competition be changed to a bird-census. "Count them, he proposed. But don't kill them."

Heidi E.Y. Stemple tells the story of how Frank Chapman, a bird enthusiast and the publisher of Bird-Lore magazine, convinced people to work for bird conservation rather than destruction. In 1900, the first year of the Christmas Bird Count, 27 bird watchers in 25 locations across the United States counted birds. More people joined the count every year and the tradition spread to other countries. Today, over 73,000 birders in more than 2,500 circles count birds tallying, in 2016, more than 56,000,000 birds!

Over several pages, Stemple takes readers along for the count, starting with the early morning owlers and continuing with backyard birds who count the birds they see at feeders. At the end of the day, reports are collected and submitted to the National Audubon Society. Stemple explains the importance of these counts and how citizen scientists contribute valuable data. A note at the end provides more information about Frank Chapman and the 2016 tallies. Those interested can check 2017 and, soon, 2018 totals at Audubon's summary site.

The story of an unheralded man and an increasingly popular but relatively unknown event is well told and inspiring. Illustrations by Clover Robin (great name!) in cut-paper collage are colorful and realistic and add to the reader's enthusiasm for birding. Stemple points out that anyone can participate through local birding clubs and groups and it's free! And although it is called the Christmas Bird Count, in fact, it extends beyond December 25. Audubon's 119th Christmas Bird Count will be conducted between the dates of Friday, December 14, 2018 through Saturday, January 5, 2019.

At the end of the book Stemple notes that many of the counters are young people. In fact, students from Fulton Learning Center (in Rockport where I currently live) participate in several counts throughout the year including the Christmas Bird Count. Clubs register the circle for their counts to avoid overlap and duplication. Definitely a book for anyone interested in birding and bird conservation and essential reading for birding clubs and groups.

FTC Disclosure: I received a complimentary review copy from the publisher. I receive no compensation for reviewing the book.