Since I started birding, Jim keeps asking me if I plan to do a Big Year. Like every hobby, sport, or avocation birding has its own vocabulary and competitions. For birders the ultimate extreme sport is a Big Year. Casual birders and non-birders may have never heard this term, or even considered that birding could be a competitive sport--but it is.

During a Big Year, birders compete to see who can spot the most species of birds in North America during a yearlong quest that starts on January 1. The concept started in the 1930s and, while there are a few rules, the only referee is the ABA checklist (although there are often arguments among birders). Birders compete using the honor system and, according to some sources, can spend around $10,000 a month getting to birding locations to add species to their lists. This is different from life lists, the very noncompetitive activity where birders keep track of species they encounter over a lifetime.

With only 675 or so indigenous species of birds in North America, beating the record requires chasing rarities and vagrants--birds that show up where they don't belong or normally wouldn't be found. In the movie The Big Year, which stars Steve Martin, Owen Wilson, and Jack Black (and first brought the concept of extreme birding to a wider audience), it was said that winning was possible primarily because of a strong El Niño weather pattern that pushed birds off course from Asia, Europe, and South America. However it gets here, once the bird is in North America, it counts!

Because of the weather pattern, and the fierce competition of 1998, some birders thought Sandy Komito's record of 745 species would be impossible to break, but don't tell that the the 2013 competitors. Birds have to be listed on the American Birding Association's checklist of 976 accepted birds (Sandy Komito claims his record is 748 because he also recorded 3 birds that were not, at the time, on the ABA checklist but now are). The list includes species that breed in North America, regularly visit here, stray here from other regions, and introduced species that are now part of the avifauna of North America. In the ever-changing world of birds, some species have been split and a couple of species have been added to the North American lists. 2013 competitor Neil Hayward recorded 746 birds plus 3 provisional birds as of December 29. He's waiting for a definitive ruling on his Big Year but regardless of how the ABA counts, it sounds to me like he broke a 15 year record! This is a big deal in the birding world.

Not having the money, time, or "fire in the belly" to do a Big Year, I do still admit to feeling the lure of an exotic species that has shown up when I see posts on the Rare Bird Alert sites (see below). Could I rush down to the Rio Grande Valley to see the Amazon Kingfisher reported to be hanging out at a rest stop? It would only be a four hour drive each way. Gas up the car, Jim!

Then again, it's probably easier (and less expensive) to experience a Big Year vicariously by reading (or viewing) about other people's experiences. In addition to the film, a few good books include:

A Big Year starts on January 1 and birders generally try to start the year with an exotic or hard to find bird so that you are off to a good start. No one wants to start their Big Year with a grackle. Me? I'm off to see Whooping Cranes and Sandhill Cranes to start my Big New Year. Happy New Year to all!

Recently Jim and I splurged and chartered a boat to go out to see Whooping Cranes. I admit that although we have lived in Texas for almost 35 years and have been visiting the Gulf Coast for almost that long, I only discovered this Texas treasure a year or so ago. Wow! What an experience to see these magnificent
creatures.

Nearly five feet tall, the whooping crane is the tallest bird in North America. Their wings span 7.5 feet across. (The photo by Capt. Kevin Sims shows a whooping crane with a great egret for size comparison.) They are white with reddish-rust patches on the top and back of their heads. Black areas on their primary feathers are visible only in flight. But the most amazing thing about them--well, one of the most amazing things--is the migration. These magnificent birds spend the summers in northern Canada and migrate 2,500 miles to Aransas National Wildlife Refuge near Rockport, TX for the winter. This is the only wild, self-sustaining migratory population of whooping cranes in the world! (There are occasional "vagrants" that show up elsewhere along the Texas coast. One was reported in Brazoria NWR in mid-November and caused quite a stir while he played with the sandhill cranes in the area for a few weeks before moving on.) They migrate during the day, stopping at night, so they may also be seen briefly along the migration route.

By the 1940s the population of whooping cranes had decreased almost to extinction. There were only 15 cranes left when conservationists stepped in to try and save the cranes. A massive effort between the US and Canadian agencies led to captive breeding programs, that, with protection and conservation, have increased the population to about 600, half wild and half captive, in a couple of different locations. All of the whooping cranes alive today are the descendants of the 15 cranes that were found in the Aransas refuge in 1941. From those 15, there are currently two migrating population--the one in Texas and another in Wisconsin--and two small non-migratory populations in Florida and Louisiana.  These birds are highly monitored, and in fact we saw the monitoring plane flying over Aransas National Wildlife Refuge counting cranes during our visit.

The cranes mate for life. Since the female lays 1-3 eggs and generally one chick survives, growth in the population is slow. The juveniles have a cappuccino color to them for about the first year; by the time they
head back to Canada, the juveniles are all white. The family unit stays together and requires about one square mile of territory for feeding. They are tolerant of other birds, including herons and egrets, but will fiercely fend off other whoopers. We watched a fight when a pair of whooping cranes got too close to another family unit. They are big and noisy! They survive 25 years in the wild and about ten years longer in captivity.

Visit the Aransas National Wildlife Refuge--from some of the observation areas you can see the whoopers in the distance. Or better yet, take one of the boat trips to get closer. The Jack Flash, owned by Kevin Sims, is smaller and can go right up to the edge of the refuge (we were close enough to hear the calls they make--hear a sample at Cornell's site) but you book the entire boat for up to 6 passengers. The Skimmer, out of Fulton Harbor, is a larger boat but you buy just the seats you need. We took this boat in 2012 towards the end of the whooping bird season so only saw a few. Thanks to all of the conservation efforts, we have the luxury of watching the cranes year after year and I'm looking forward to seeing  them again on our next trip to Rockport.
Posted by Jeanette at 9:45 AM No comments:

Librarians are fond of saying that books help readers fly to new heights and explore new worlds. And I believe that is true. Books can help readers discover new worlds and new interests. They also make great holiday gifts. While books may not always garner the oohs and aahs of the latest Playstation, they last a lot longer. So consider some of these bird books for those on your holiday lists. Bird Brainz will love 'em! 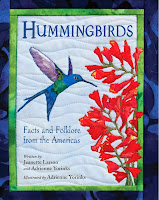 Ok, I'll start with blatant self-promotion. Hummingbirds: Facts and Folklore from the Americas

has sold well as a gift not only for young people but for adults who enjoy discovering the cultural background to some of the hummer information. Folktales from cultures across the Americas are retold along side facts that relate to the stories. 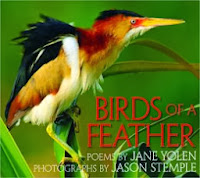 Another favorite of mine is Birds of a Feather by Jane Yolen. Actually Yolen has several books about birds but this one stands out. Combined with a beautiful photograph by Yolen's son, each poem is followed by a few facts about each bird. 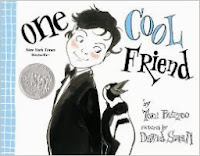 Although there is little or no factual material in Mr. Popper's Penguins, I can trace my fascination with penguins back to reading this classic book. This book is a chapter book for elementary aged readers, although it is also a good family read-aloud. Pair it with One Cool Friend, a picture book by Toni Buzzeo about a child who is drawn to the Magellanic penguins he sees at the aquarium.

Budding birdwatchers will appreciate Look Up!: Bird-Watching in Your Own Backyard, which I reviewed earlier this year. Pair the book with a beginner field guide like Backyard Birds (Field Guides for Young Naturalists) and your young birder will be good to go. 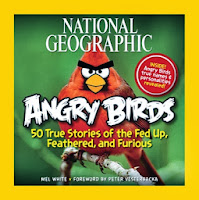 And just for fun, if your young reader loves the game Angry Birds, check out National Geographic Angry Birds: 50 True Stories of the Fed Up, Feathered, and Furious. The book is a hilarious look at real birds who are annoyed, testy, outraged, or furious! Mixed in with funny comments related to the game are photos and facts about real birds and the behaviors that classify them as angry.

These are just a few of my recent favorites and I have mentioned other books in this blog. I hope you will add your favorite bird books for kids in the comments. The birds--and readers--are depending on you.