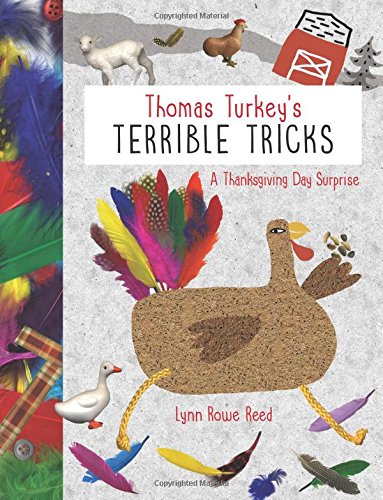 After all of the other turkeys on Felicia's farm have disappeared, Thomas is afraid he is about to become Thanksgiving dinner. To distract the farmer from adding him to the meal, Thomas resorts to tricks and enlists the help of his barnyard friends to drive Felicia away from the farm. Reed's art is whimsical and a little quirky, almost childlike, and very colorful. The humor in Thomas Turkey's Terrible Tricks, and the ingenious animals, will appeal to readers who love Click, Clack, Moo: Cows That Type by Doreen Cronin.

After being out of print for several years, Lynn Rowe Reed is reissuing a new version of her Thanksgiving book. The art work was totally redone for Thomas Turkey's Terrible Tricks but the text is virtually the same as in Thelonius Turkey Lives! Although Thomas is a domesticated turkey, readers do learn a bit about the bird in Reed's story. One reason I especially like the story is that it has a compassionate ending. Jim and I are vegetarians. I stopped eating birds when after someone pointed out that we kill millions of birds a day; but we call them chicken or turkey. We haven't eaten turkey at Thanksgiving in over 25 year so it's great to find a book that shares what we know: it's the friends and the side dishes that really make the meal special!


Benjamin Franklin wanted the turkey to be our national bird instead of the bald eagle because they are intelligent. Their heads also can change colors varying between red, white, and blue, when excited. Wild turkeys are upland ground birds that are very different from the bird that many Americans eat on the 4th Thursday in November.  Easily recognizable by their distinctive plumage and bare heads, their gobbling call is also very familiar to anyone who spends time in the habitat. They travel in flocks and roost in trees at night. Although hunted to near extinction in the 1930s, more than 7 million wild turkeys now roam throughout North America.

Posted by Jeanette at 8:28 AM No comments: