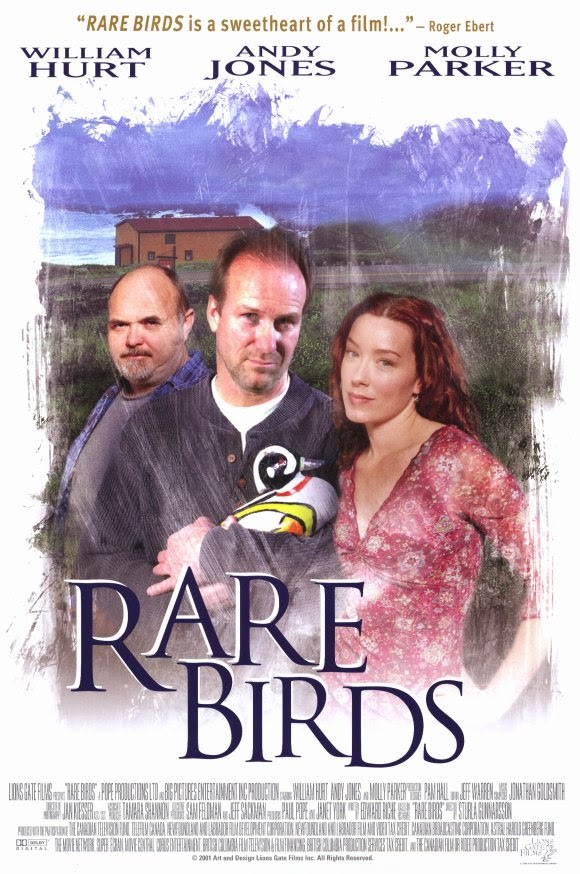 Since beginning to watch birds a little more seriously, I've become aware of a sub-genre of movies: birding films. Rare Birds had been in my Netflix's queue for awhile, probably suggested because I had borrowed The Big Year. It arrived a few days ago and I watched it last night.

I'd never heard of the movie despite its starring one of my favorite actors, William Hurt. Hurt plays Dave Purcell, a depressed and somewhat reclusive restaurant owner in Newfoundland (great scenery). He serves first class meals at The Auk, but does nothing to drum up business, spending his days sampling his great wine cellar. In fact, many of the locals think the restaurant has closed.

A friend, Phonce, devises a plan to drum up business by reporting sightings of a rare bird in the area. This attracts hordes of bird-crazed people with binoculars. Phonce is a conspiracy nut, paranoid that Winnebago is trying to steal his plans for a personal submarine but he always has a plan and he plans to keep The Auk open and his friend in the area. Of course two years earlier Phonce found several kilos of cocaine off-shore and narcs may be in the area trying to catch him selling the dope. It's unclear whether Phonce is partaking of his "treasure" but William Hurt certainly snorts a few lines in several scenes.

Along the way Dave jettisons his estranged wife who is living in Washington DC, gets help running the restaurant from locals who make supply runs, wait tables, and help with the food preparation, and falls in love. The only "action scene" is one where Phonce and Dave are testing the submarine and it is unclear whether they will survive. The first two-thirds of the movie are quirky with a whimsical touch of rom-com. Unfortunately by the 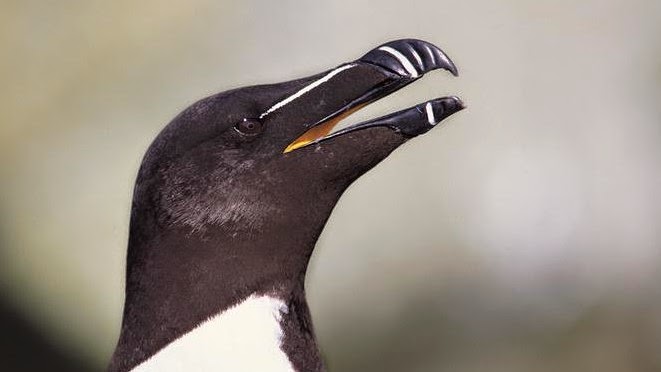 end it is a little over the top and falls apart. Even worse, there are few birds. I counted only three mentioned: The Auk, for which Dave's restaurant is named; the rose-crested grebe; and the Tasseter's Sulfurious Duck. The duck is the supposed rare bird everyone is searching for. In fact it is a fictional species.  I don't find any information about a rose-crested grebe so it is either made up or a very uncommon name for another grebe (possibly the red-necked grebe?). The movie doesn't even talk about auks. Auks can hardly walk and have very small wings which they use to "fly" underwater. They are related to puffins and black guillemots.

Bottom line: An enjoyable, if not distinguished, independent film that really has nothing to do with birds or birding.

The movie was shot in 30 days except for the last scene. Unexpected early snow delayed filming for seven months until the snow melted!

The crew who had been shooting The Shipping News contributed equipment and their services to complete the movie.

The movie's premiere was scheduled for September 11, 2001. Of course that never happened, and the film was pretty much sent to rental.
Posted by Jeanette at 5:27 PM No comments:

Bird Brainz: Birds, Birding, and Books: H is for Hawk

Bird Brainz: Birds, Birding, and Books: H is for Hawk: I don't generally read memoirs but sometimes it is good to get out of your comfort zone and read something different. For several months...
Posted by Jeanette at 9:44 AM No comments: