Could a Penguin Ride a Bike? 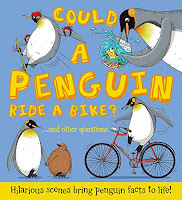 I missed World Penguin Day this year (it was April 25). That's approximately the day that penguins begin their northern migration. Penguin Awareness Day is in January (the 20th) and I missed that one, too. But I don't want to wait any longer to share this book, which takes a humorous look at those funny birds, and specifically the king penguin. 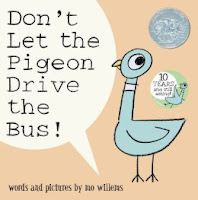 The format of Could a Penguin Ride a Bike has king penguins interacting with children in silly ways that will appeal to young readers. However, while they are laughing, they are also learning about penguins. The tone of the writing is a little reminiscent of Don't Let the Pigeon Drive the Bus!, as a situation is presented followed by the things that are wrong and flows easily. But after the laugh, correct information is provided.

"What if a baby penguin came for dinner? He might try to eat everything!"

The final double-page spread shows a very large map of the world. Kids will need to look closely to see where king penguins live. Of course there are seventeen types of penguins, and a few do live in places other than Antarctica, home of the king penguin. While the facts, and the funny stuff, pretty much hold true for other types of penguins, the emphasis on the king penguin is not always made clear. The last page includes a postcard, featuring real penguins, offering greetings from Antarctica. This is a nice touch since the illustrations are more cartoonish. I think it would also have been nice to include some links for penguin sites.

Of course most children will only see penguins in aquariums, like the king penguin I saw in Montreal's Biodome, I was fortunate enough to see fairy penguins in their natural habitat in Australia,
and someday I hope to see penguins in Antarctica. I can dream! In the meantime check out this book and some of the penguin cams available, like the one from the Audubon Aquarium of the America.