As birds go, parrots seem to have a very special connection with humans. We are charmed by their colors, intelligence, and voices. The broad order that includes parrots contains over 350 birds but I suspect most of us think about parrots as pets more than wild birds because they have shared our lives and been popular companion animals for centuries. Some imitate human speech and a few, like the African Gray Parrot (see the October 22, 2013 post about Alex), are so good at mimicry that they seem almost human. In the wild some birds live up to 80 years! But some wild parrots are endangered and although it is illegal to sell wild-caught parrots, the popularity of the birds continues to drive illegal trade that further decimates some populations. For example, there are fewer than 500 Blue-throated macaws, while there are less than 50 mature orange-bellied parrots in Australia. Fortunately some efforts to save  parrots, like the kakapo, the world’s heaviest parrot and one that is also flightless, are working.

Parrots Over Puerto Rico by Susan L. Roth and Cindy Trumbore tells the story of the fight to save another breed of parrot. Their story is about the birds that have lived on the island of Puerto Rico for millions of years, but it is also a history of Puerto Rico and the impact that population growth has had on the birds. Also called Iquaca, the Puerto Rican parrot is the only bird unique to Puerto Rico. (Iquaca is the onomatopoeic name that mimics their flight call.)


Before the island was settled, it is estimated that hundreds of thousands of Puerto Rican parrots lived in the area. As soon as people arrived on the island, beginning with the Tainos around 800 CE, the parrots were hunted for food, to keep as pets, or to use the feathers for decoration. As sailors landed ships at the island, black rats began to take over the nesting holes and ate the parrot eggs. Since each pair of parrots usually mates for life and  produced only one nest of chicks a year this took a serious toll on the parrots. By 1937 there were only about 2,000 parrots in the mountains of Puerto Rico and in 1954 only 200 parrots were left. By 1967 only twenty-four parrots remained. Unless something happened quickly the Puerto Rican parrot would be extinct.

This is becoming an all-too familiar story. Hunting, environment and other factors decimating a population. Sometimes scientists and concerned individuals are able to step in and help before it's too late. Fortunately this is one of those stories with hope for a happy ending.

Concerned scientists started to raise chicks raised in captivity using Hispaniolan parrots, their less rare cousins, to nurture the babies. By 1979 the first aviary-raised chick was released back into the wild. By 1999, one of the two aviaries had 54 parrots. Ten captive-bred parrots were released in 2000. People taught the birds to hide from hawks and avoid becoming prey. Dozens more birds were raised and released. Perhaps these birds will not disappear after all. An Afterword details more about the Parrot Recovery Program with photographs of the birds and the aviary staff and a look at how the history of Puerto Rico is intertwined with the history of the birds.


The picture book is arranged vertically, rather than horizontally, allowing a spectacular view that runs from the ground level, high up into the tree tops. The story is beautifully illustrated in collage by Susan L. Roth. I had the opportunity in April 2013 to watch Susan work her magic. By only ripping or cutting pieces of paper, including take-away menus, into shapes, Susan forms pictures that are then positioned and held with tape and glue.  She takes pride in the fact that no other media are used--no pens, pencils, paints. The book offers a great story for bird-loving young readers and will inspire them learn more about endangered birds and maybe try their hand at collage art.


A copy of the book was provided by the publisher, Lee and Low Books.

As an undergraduate student in anthropology, many years ago, I signed up for a primatology class. I love non-human primates and thought the class would be a blast. Then I discovered that not only were we expected to sit for hours studying the gorillas and chimps at the Albuquerque Zoo, but we had to be able to identify more than 100 different non-human primates from pictures. Not only did that sound like too much work for a last semester senior who didn't need the elective, the catch was that some were so similar looking that the only real difference was chemical. So I dropped the course faster than a monkey eating a banana.

Fast forward about 40 years and I'm facing the same issues with birds. Not only are there hundreds of "little brown birds" (LBB), but it can be nearly impossible to identify the specific species. Case in point. I was 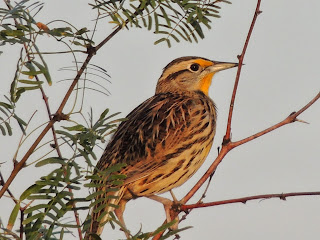 recently thrilled to find a little bird at Cape Valero in Rockport. Well, really I think Jim spotted the bird. It looked like "just another" LBB until I got out the binoculars. Then I started to see some yellow. I snapped a couple of photos, trying to get different angles. And then I set out to figure out what bird I'd seen. Was it a new one to add to my life list?

I posted the best of the photos to two of my Facebook birding groups, not only to share the photo and record the sighting, but also hoping someone would say, "What an amazing shot of _________________." Only no one did. They said "amazing shot" and "nice capture" but no one mentioned the type of bird.

So, pull out the field guides. I noted the small size and the short tail. I noted the field marks like yellow-orange throat and supraloral (the area between the eye and the beak). I noted the striped feathers on the flanks and belly. And of course the brownish eye stripe should help. Another shot of the bird showed me a white crown stripe. Of course I also took into consideration the area (South Texas) and the terrain (scrubby trees and grass near water). Based on the size, I started looking at wrens and sparrows. .

Ah, ah....it's a Le Conte's Sparrow! One of the most easily identifiable birds, according to Audubon. But wait, the beak is wrong. Sparrows have conical beaks while the bird I saw has a longer dagger-like beak. So I'm pretty sure this is not a Le Conte or any other sparrow. Back to the guide books.

Warbler's have stripes. But it's not a Pine Warbler (long-tailed). Maybe a Cactus Wren? Nope. They have rounded tails and don't have yellow. Consulting my Sibley Guide to Birds left me seeing so many different birds that I threw up my hands in despair.

Distraught, I posted the photo to Cornell Lab of Ornithology's Facebook page and begged for help. What did the experts conclude? Eastern Meadowlark. Immature.

Trying to learn, I looked at images of the Eastern Meadowlark. Field marks include a black patch or V on the breast, which if it appears on my bird is very very faint and streaked (indicating a juvenile bird). The illustrations in Sibley's are more similar to my bird than I see in the photographs on websites like WhatBird.com, where the birds look brighter and more yellow. To add further to the debate, given the region of Texas where this bird was seen, it could be a Western Meadlowlark. The only discernible difference is their song. The Eastern Meadowlark trills, "see-you-see-yer" while the Western croons "shee-oo-e-lee shee-ee-le-ee." Got it? Me neither. This isn't much better than chemical differences between monkeys!

I don't know how some birders can identify "on the fly." I'm not giving up but I have to have a photograph and even then it really would be a lot easier if the birds wore identification cards!

When I walked out to my yard at the house in Rockport I saw a bird sitting under a bush. I 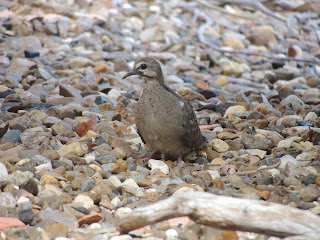 watched it, assuming it might be hurt, and also kept the dogs away from it. After getting a photograph and watching the bird, I realized it was an immature bird and could fly but was content to stay under the bush and in the rocks. The next morning the bird wasn't under the bush and I figured it had flown away. But then I walked into the far back of the yard and two birds were sitting near the tool shed. They've been hanging around for several days now, clearly feeling safe in spite of Daisy and Indigo's curious looks.


These two are mourning doves, one of the most common birds in North America. Their long pointed tails are unique among North American doves, of which there are about 15 species. The mourning dove is the only native Texas bird that occurs in all 254 counties and, interestingly, is the only dove species found in Canada, although there are 300 species world-wide. Hunted for sport, more than 20-45 million are killed annually, although they reproduce enough that they are not in danger of disappearing. More than 350 million are estimated in the US population. (I learned how scientists count birds and it's very interesting but that will be another posting.) 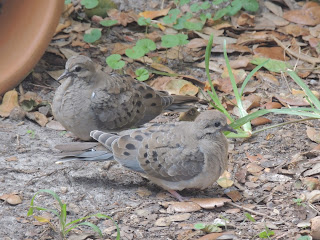 Mourning doves are sometimes confused with common ground doves, but the easiest field mark for distinguishing the two types is the beak color. Ground doves normally have an orange/pinkish beak. As mourning doves mature they also get blue "eyeshadow" on their eyes. They are fascinating to watch and are not especially skittish, remaining close even as you approach them. When they fly it can be an explosive burst and they are fast flyers, going up to 40 mph. Their name comes from the drawn out call, a soft coo-oo followed by two or three louder coos that can sound like an expression of grief.

By the way, doves and pigeons are members of the same family, Columbidae, and the terms are sometimes used interchangeably. Pigeon often is used to refer to the larger birds in the family and, in fact, the plump "pigeon" seen in city parks begging for food is really a rock dove.

Who knows how long this pair will stay in the yard. But I'm enjoying the close up look at nature while they are here.