A Goofy Guide to Penguins and The Real Poop on Pigeons

I'm looking at these two books together because they are a hoot! Pun intended. Graphic non-fiction is becoming very popular and appeals to new and reluctant readers. These graphic novels also allow for a more comic look at their subjects.

The Real Poop on Pigeons! by Kevin McCloskey takes a humorous
look at those birds that are sometimes called flying rats. When a man sitting in the park shoos the pigeons, a group of kids show up in pigeon costumes to clue him in on the "real poop." They fly faster than cars and provided the first airmail service. I never thought about the terms but mating is when two pigeons find each other and have babies (they mate for life) but if humans pick the mom and dad that is "breeding." Breeding has resulted in some really unusual looking pigeons. And the now-extinct Dodo was a type of pigeon! The cartoon illustrations

are done on pigeon blue Fabriano paper, the same paper Picasso used. Picasso loved pigeons so much that he named his daughter, Paloma (Spanish for pigeon). While the book is short (40 pages) and the reading is level one (pre-k to kindergarten) it is filled with interesting facts that will enlighten readers of any age. Parents and teachers can extend the book with a variety of resources provided online by Toon Books.

I admit that I don't take many pictures of pigeons and do even less at identifying species. This one is from Parque de los palomas in San Juan, Puerto Rico. Pigeons are closely related to the more endearing (to many) doves and are a common sight in many cities. They were introduced from Europe in the 1600s and, like many non-native species, quickly flourished and multiplied. Because of their ability to find their way home, even when released far away, they are used as carrier and homing birds. In both World Wars, they were used to carry messages across enemy lines. Archaeological evidence indicates they were domesticate at least 5,000 years ago. 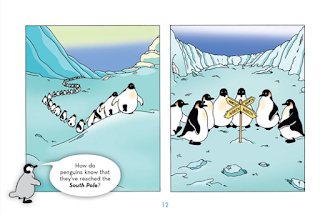 The second book, A Goofy Guide to Penguins by Jean-Luc Coudray & Philippe Coudray is also a level one reader but focuses on those silly looking birds that live in the southern hemisphere. The only penguins in the book are from the South Pole and the "guide" is filled with more fun and jokes than actual true facts.  (“Why do penguins need a diving board? To break the ice!”) They are silly birds and a double page spread at the end clues readers in on the "100% genuine, real facts. So while readers won't learn as
much about penguins as they did about pigeons in McCloskey's book, penguin fans will love the comic illustrations and silliness.

The only photos I have taken are from places like BioSphere in Montreal. The only penguins I've seen in their natural habitat are fairy penguins from Australia. They are darling little birds! Highly adapted to water life, penguins don't fly. Their "wings" help them to swim, acting more like flippers.

Posted by Jeanette at 5:53 PM No comments: