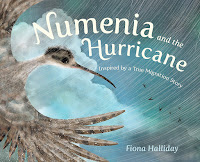 Numenia and the Hurricane: Inspired by a True Migration Story


I’ll start by saying this is a book I would have loved to have written. We were living in Rockport, TX during Hurricane Harvey. While my family and pets evacuated, many birds could not, and I learned how hard it was for birds to survive a storm. When we returned to the devastated area, it was heartbreaking to see the avian carnage. Pelicans had been slammed against the jetties and seawalls, where their carcasses decayed. Many of the migratory birds left but native birds didn't know to go and died. Thankfully, hummingbirds had not started their fall migration and were fine, although people had to step in to feed them as most plants were defoliated. For three months we didn’t see even a grackle or a dove. But slowly, the birds returned. Numenia and the Hurricane is a somewhat different hurricane story and one with a happier ending.

During a hurricane, strong winds blow birds off their path, often leading them to new places or wearing them out so that they don't have to stamina to follow their original path.

Inspired by the true story of Hope, a whimbrel being tracked by scientists, Halliday tells the harrowing tale of a lone whimbrel, separated from her sisters during their southward migration from the Arctic. Lyrical lines of text help us to feel for the poor bird as she is tossed and turned, battered by the strong winds. Readers learn that Numenia preservers for 27 hours, alone, until finally, somehow, with good natural instincts but plenty of wrong turns, she makes it to the US Virgin Islands, tired and hungry, but safe with her sisters.

As explained in the end notes, Numeria’s story is based on a bird named Hope, caught in Tropical Storm Gert and blown way off course in 2011. Hope was tracked by researchers for several years, allowing them to marvel at the whimbrel’s stamina and fortitude during many courageous migration journeys. Like Numeria’s story, her journey was amazing but one that many birds face each year during their journey between winter and summer habitats. The Whimbrel’s range is rather limited, but they travel each year between Canada and the Eastern and Southern US coasts, as well as into the Caribbean.

Halliday’s art is visually stunning and allows the reader to feel like they are inside the hurrican bouncing along with Numenia. Interesting perspective and angles give us a birds-eye view of the danger and confusion this small bird faces. With great illustrations and text, this is a great choice for read-aloud. Halliday is an accomplished birder and naturalist and I hope this is the first of many bird books we’ll see from her.


Click on the tab for BOOKS ABOUT BIRDS for a list of all books mentioned in the blog posts.

FTC Notice: The author provided me with an electronic copy of the book to review.

Posted by Jeanette at 3:34 PM No comments:

Birdwatching in the Time of Corona

Trips are limited but outdoor activities are encouraged with, of course, proper physical distancing. Birdwatching has become a favored outing as it can be managed in small groups or alone. You can even birdwatch in your backyard or neighborhood.

Bird Watcher's Digest offers several Bird Bingo! cards for different regions of the county. Spring migration is still underway so most of us should have no problem getting a straight-line BINGO!  Who's up for the challenge? (Download your region if you are not in Texas.) 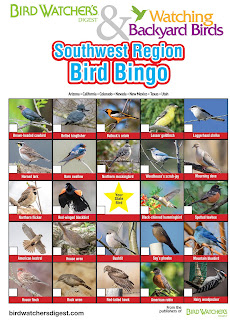 Email ThisBlogThis!Share to TwitterShare to FacebookShare to Pinterest
Labels: birdwatching

BirdNote: Chirps, Quirks, and Stories of 100 Birds from the Popular Public Radio Show

In 2004 Seattle Audubon’s team began writing “compelling stories about the intriguing ways of birds.” These short, one-two minute pieces, were recorded for local public radio. In 2006, the program began to expand and is now heard on over 200 public radio stations. In Austin, it can be heard as part of some Living on Earth segments on KUTX-90.5 FM. New and older segments can also be heard on-line at https://www.birdnote.org/shows/.

The book, BirdNote, edited by Ellen Blackstone with illustrations by Emily Poole, is a compilation of 100 of the best stories from the radio show. Usually covering a single page, with an illustration of the bird being discussed on the facing page, each brief piece features the habits, quirks, songs, biology, and idiosyncrasies of a bird. Articles include: Is anting an avian spa treatment? How does a finch’s beak help it eat sunflower seeds? Why do some gulls have a red dot on their bills? Did you know that Red-winged blackbirds have a harem? The bright red “epaulets” warn other males to stay away from his many female companions. Roadrunners sound like a lonely puppy. And Barn swallows are natural pest control. The vignettes are informative, charming, poignant, and often humorous. 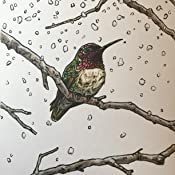 The short pieces make it easy to dip in and sample entries, but the index also allows readers to look up specific birds. This compilation, published in 2018, focuses a lot on birds of the Pacific Northwest, understandable given the origins of the program. More recent programs feature birds from all over North America, and even some worldwide birds. A feature from the program that is not able to be replicated in the book are the sounds and songs included in most episodes. These come from BirdNote’s partnership with Cornell Lab of Ornithology. On the other hand, the illustrations by Emily Poole are, of course, not seen with aural pieces and will be of special interest to artists and illustrators. Each segment is vetted by experts and the readers are professional narrators, storytellers, and DJs. Readers who are also listeners may hear these voices while reading an episode.

Get a copy for yourself and as a gift for a birding friend.

FTC Notice: I purchased a copy of this book for review.

Posted by Jeanette at 9:54 AM No comments: