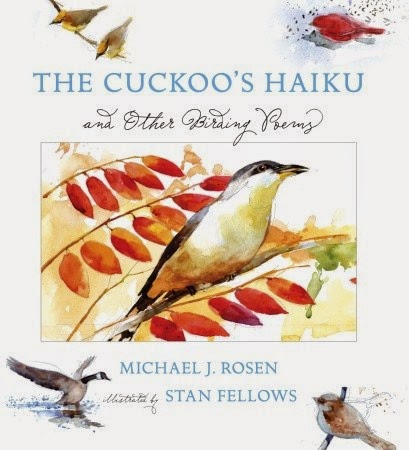 I haven't blogged in almost two months but I think I had a good reason. Jim and I decided to move permanently to the house in Rockport so I've been cleaning the "nest" in Pflugerville, packing up stuff, and getting the house sold. I hadn't really thought of our life changes in bird terms until my dear friend Michael J. Rosen, author of The Cuckoo's Haiku: and Other Birding Poems, sent a haiku and a photograph of a hummingbird's nest to me as a moving gift. So yes, I guess we were abandoning our old nest and "building" a new one.

It's a great time to be moving to Rockport as it is nesting season on the coast and it's fascinating to watch the birds mating, nesting, and raising their young. The gulls and skimmers are nesting on Rockport Beach. The nests are scraped into the dirt and sand in several protected areas. It's quite a challenge to spot the eggs and the parents are very protective. Although I've yet to actually see a chick hatch, I am starting to see them fledge and the chicks are adorable.

Black skimmers have distinctive red and black bills that look a bit like candy corn to me (or I guess more accurately what is called autumn mix since those are black, orange, and white). The lower mandible is longer than the upper, allowing the bird to drag its mouth through the water skimming up small fish. There may be as many as four eggs in a clutch. At birth the mandibles are the same length (look closely at the chicks), but start to show differences by four weeks. The parents feed the chicks until they are about four weeks old and can skim their own food. This is the only American skimmer; the other two species are African and Indian. Although the skimmers are migratory they stay in Rockport year-round.

The laughing gulls are very abundant but I never tire of watching them. Rarely do I go out to take photographs without getting a few of the gulls doing silly things. They always look so clean and graceful!

The laughing gulls nests will often be mixed in areas with or near the skimmers. The gulls are monogamous, often staying together through several breeding seasons. Each clutch may have one to four eggs. Both male and female gulls incubate the eggs for about 30 days.The gull chicks will go through several molts, changing from light brown feathers to the more familiar white head and gray back.

It appears that some of the gulls stand guard around the edges of the
protected nesting area to warn of intruders.  I find this kind of ironic as laughing gulls sometimes sneak up and steal skimmer eggs. We joke that every post has a gull because they do seem to love standing on the signs and posts around the nesting area.

After the egg hatches, gulls clean out their nests to prevent shell pieces from attaching to other eggs, preventing hatching. Seems like we all need to clean house and build a new nest once in awhile!