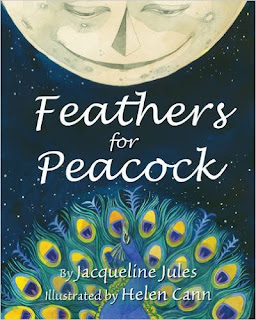 Pourquoi stories (also called origin stories) are created to explain why things happen in the natural world. They are often legends passed down orally but, while they may have some grain of truth, are fantasy. Usually they start in the past ("Long ago, when the world was new...") and finish with the explanation as to why things are they way they now are. While many reflect the cultural beliefs of the group telling the story, some are modern writings or modern stories based on old stories. Some of the most well-known modern pourquoi stories are included in Rudyard Kipling's Just So Stories.

There are a lot of pourquoi stories about birds, including several in my own book, Hummingbirds: Facts and Folklore from the Americas. Feathers for Peacock  is an original pourquoi story by Jacqueline Jules that explains the how peacock got his gorgeous feathers.

We learn that originally birds had no colors, and in fact, had no feathers at all. Upset because the lack of feathers meant they were cold in winter, the birds appealed to the wise full moon. Realizing that the birds needed help, the full moon told them what to do. Unfortunately Peacock was buried deep in the leaves and did not hear the instructions. So while Flamingo turned bright pink, Duck got green and brown feathers, and Raven found shiny black feathers, Peacock missed out. Knowing that they could not leave him like that, all of the birds offered one of their feathers to Peacock. Peacock's body was suddenly a jumble of colors, but moon helped him arrange them into a "clear, colorful pattern." When Peacock spreads his feathers he is "showing everyone how beautiful kindness can be." 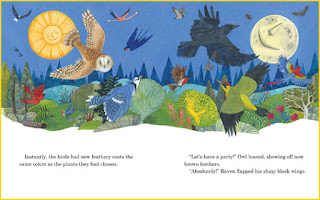 The colorful illustrations by Helen Cann highlight the story. Especially notable are the winter scenes  that almost glow with grayish-whites so that readers can almost feel the birds shivering.

The story concludes with two pages of fun facts about peacocks and information about the inspiration for Jules' story. While she credits Afro-Caribbean roots for her story, the birds depicted in the story and the illustrations are not necessarily birds that would be in the same area. That doesn't detract from the story.
Peacocks are a bird many children will see in parks and zoos, adding to the fun of sharing this story.

In addition to being a fun story to share, the book can be used as inspiration for children to create their own pourquoi stories. The website ReadWriteThink has a worksheet to help outline the tale.


Note: I received a complimentary copy of the book from the publisher, Wisdom Tales but that in no way influences my review. 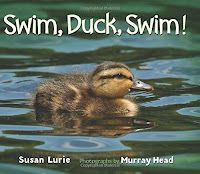 I have a backlog of books to review so many will be brief but I don't want to miss any of the many great bird books that have been released recently.

Nesting season has started and we will soon have babies in the Coastal Bend. Few things are cuter than ducklings!  This adorable board book is perfect for little hands. Simple, short lines of text accompany photographs of mama, papa, and baby duck. Little duck doesn't want to learn to swim (he doesn't like to get wet!). Finally he is swimming. While the story is about a duck and what makes a duck a duck (they swim!) the patience with which the parent ducks work through their child's fears make it a good book to use with a child who is herself learning to enjoy the water.

While not the type of duck pictured in Swim, Duck, Swim! some of my favorite ducklings are the Black-bellied Whistling ducks. Found primarily in Texas and Louisiana, these ducks really do whistle. As they fly overhead you will hear them!
Posted by Jeanette at 12:36 PM No comments: