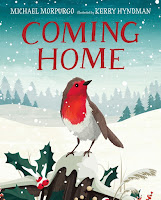 A plucky, determined robin travels home for Christmas to meet his mate in this charming picture book. Feeling the pull of a mysterious force, the bird swoops and darts, soaring onward and upward, on a long journey to leave the cruel snows and make it safely home where his mate is waiting. Gorgeous digitally composed illustrations vary in tone and color to reflect the various areas the robin must fly through. Over land and water, escaping danger, sometimes flying in a flock but often alone, helped along the way by a kindly sailor, the little robin is finally with the one he loves. While this is primarily a gentle story to read aloud, it is also a heartwarming holiday tale and readers will learn a bit about birds along the way.

Prefatory facts refer to the bird as a Scandinavian robin, although I don't find that there is a species with that specific name. European robins (Erithacus rubecula) are found from Siberia to Algeria and the Azores and robins from Scandinavia migrate to Great Britain and Western Europe to escape the cold winters. The same fact section explains that robins use the stars to navigate and fly up to a 1,000 feet above sea level. In contrast to American robins, which are heralded as a sign of Spring, in Britain the European robin is most associated with Christmas as they begin looking for a mate in mid-December and have, hopefully, found one by mid-January.

My only quibble with the illustrations is that there is no discernible difference shown between the male robin and his mate. The female's coloring should be muted, almost washed out, in comparison to the deep, rich colors of the male. I think it would also be helpful to have a map showing the bird's migration route.


Although the term robin is used for both European robins, members of the Old World flycatcher family, and the American robin, which is a thrush, this story is clearly about a European robin.  While both birds have reddish-orange breasts, they are not related. The European robin's breast is so distinctive that it is also called robin redbreast.

The author, Michael Morpurgo, is best known for his book, War Horse, which was also made into a major motion picture. Illustrator, Kerry Hyndman, is a London-based illustrator and map-maker. Coming Home is her first children's picture book.