Alex The Parrot No Ordinary Bird: A True Story

Alex the Parrot by Stephanie Spinner has been sitting on my book cart (yes, I have a personal library style book cart) for a year (almost exactly--it was released on October 9, 2012). I couldn't give it up by donating it to my local library but I hadn't found time to read it. Glad I held on to this book! It's a great example of an illustrated book for readers who are older than the "typical" picturebook set as well as a nonfiction picturebook. It's also definitely NOT a cute bedtime storybook about a parrot. Too much detail and information and a lot of fodder for discussion that would keep the kids awake. So. Who was Alex?

"One June day in 1977, Irene Pepperberg walked into a pet store looking for an African grey parrot." Of the several available, she singled out one bird to be part of an experiment--the Avian Learning Experiment--at Purdue University. Through her work with Alex, scientists learned that, far from being barely intelligent creatures, some animals, including parrots, are highly intelligent and capable of understanding the words they hear--and in the case of parrots and mynah birds--those they say. 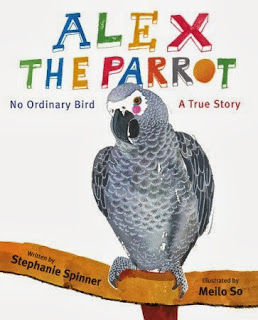 television show about a new science--the study of animal language. In 1974, while an anthropology student at the University of New Mexico, I learned about the current research teaching chimps to communicate using ASL. Years later, I met one of the subjects of that research, Nim Chimpsky, at Cleveland Amory's Black Beauty Ranch in East Texas. Believe me, that chimp knew how to tell you what he wanted you to know! Studying chimps and gorillas, like Koko, or dolphins was where the grant funds went because those creatures have brains more like human brains. No one other than Irene was especially interested in "bird brains."

Alex was in many ways an ordinary parrot. He imitated noises he heard but spoke as clearly as a person, something not possible for a chimp or a dog or a dolphin. Budding scientists will appreciate following the processes and methods Irene used to teach Alex and her attempts to discover whether he really understood what he was saying. Like a petulant toddler "no" became one of his favorite words. Importantly, the book also explains why the research had to be meticulously document so that it would not be dismissed as operant conditioning like "Clever Hans," a horse who performed math problems by picking up cues from his handler. Eventually Alex could understand and say hundreds of words, many more than Washoe, a chimp who could sign 130 words, or Koko, who could sign 200 words. Alex even understood concepts like bigger or smaller and the concept of zero--something children don't grasp until they are about four or five years old. Alex even became an avian celebrity, appearing on television shows.

In the lab Alex "ruled the roost" and started teaching a younger bird words and even would tease his young pupils. Regrettably Alex did not live the normal life span of an African grey parrot. In his short life he taught the world that being a bird brain is a good thing and his groundbreaking work, and Irene's, continues with Griffin, one of Alex's students. African Grey Parrots are known as the "Einsteins" of the parrot world. In the wild they live in the rain forests of  West and Central Africa and importation of wild-caught parrots into the US has been prohibited since 1992.

The illustrations by Meilo So, who also illustrated Pale Male: Citizen Hawk of New York City, shows Alex in exquisite watercolor detail with sketchier 1970s style scenes around him. So used colored pencils and ink to provide additional illustrations. The hand-letter type uses the same shaped letters Alex used in his testing and cartoon-like bubbles show his dialogue.

Adults or teen readers who want to know more can read Alex & Me: How a Scientist and a Parrot Discovered a Hidden World of Animal Intelligence--and Formed a Deep Bond in the Process, Pepperberg's book about her life with Alex. Readers from about third grade through middle school will learn a lot about African Grey Parrots and animal intelligence and this is a great companion book for a longer fiction book like The One and Only Ivan by Katherine Applegate, about a gorilla that communicated with people.


I received a review copy of this book from the publisher, Alfred A. Knopf.

Jeanette
I'm a retired librarian. After writing a book on hummingbirds, Hummingbirds: Facts and Folklore from the Americas (with Adrienne Yorinks) I became interested in birds and birding. I also started taking photographs of birds. This blog allows me to talk about birds and birding, share my photographs, and also talk about bird books. After living in Rockport, TX for five years, where I birded and went to the beach every day, we moved back to the Austin area. Here I'm about to start the Travis Audubon Master Birder program (a class of only 16 birders) and am providing community programs on hummingbirds.

Unless otherwise noted, all photographs are ones that I've taken, for better or worse. If I use a photograph that is not mine I have permission to do so or it is licensed under Creative Commons for non-commercial use. Please respect my copyright and ask if you would like to use one of my photographs. I am happy to send higher resolution images.
All content is copyrighted by Jeanette Larson. I'm happy to have you quote from me, with attribution, or provide links to this blog.